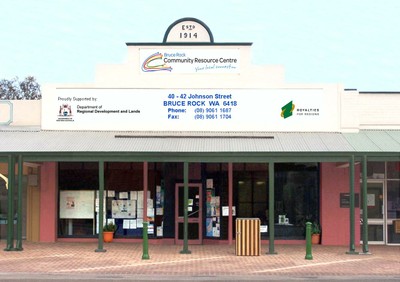 About the Bruce Rock CRC

The Bruce Rock Community Resource Centre (Inc) started its life off, as the Bruce Rock Telecentre (Inc) on the 23rd February 1998.  It started with 1 employee – the Coordinator in the Shire offices.

It then moved to the old Bankwest building at 40 Johnson Street with a desk, chair and computer with a new Co-ordinator.  With grant money from the State government and Lotteries West the building was fit out with equipment to generate an income.  The local paper – “The Rock Review” moved in as well and has been produced with the help of volunteers at the centre ever since.

In August 1998 the Telecentre expanded by adding a conference room out the back.

March 1999 saw the first trainee for the Telecentre.  We have had at least one trainee ever since.

When the banks left town, the Shire CEO approached several businesses in the main street with a view of opening a Westpac Instore.  On the 16th August 1999 the Bruce Rock Telecentre opened the Bruce Rock Westpac Instore.  Income earned from the Instore enabled the centre to continue to employ a trainee and an additional staff member to work the Bank.  Commissions from the Instore have grown over the years allowing us to subsidise the use of the centre by community members and also helping the Telecentre to keep its costs low.

The Telecentre needed to expand again and with a vacant building next door, work was started to refurbish it to make it part of the Telecentre.  On the 14th July 2000, Farralls Arcade was officially opened.

TO BECOME THE CENTRE WE ARE TODAY

On the 10th of May 2010 the Bruce Rock Telecentre (Inc) changed its name to the Bruce Rock Community Resource Centre (Inc) as part of the State Government’s “Royalties for Regions” program and the rebranding of the WA Telecentre Group.  This initiative is to put funding back into the rural regions of Western Australia and has provided us with much needed income to help provide various services to the Bruce Rock community.

We now employ a Coordinator, an Administration Officer, a Trainee, two casual staff and a cleaner.